“I came to CREATE after having negative experiences of treatment with the NHS, where I paid for a round of treatment, having not been accepted for funding. I found the experience incredibly impersonal; I once got called in to my appointment with a vibrating gadget rather than being called by name.

The cycle with the NHS failed, and I turned to natural medicine specialist Dr Trevor Wing, who recommended that I try CREATE. I attended an open day with my partner Matthew and immediately realised that the approach was different to anything I had experienced previously. It was clear that treatment at CREATE was very personalised and that each patient was treated as an individual rather than a number. I also liked the fact that I wasn’t going to be pushed into IVF if it was not right for me: Professor Nargund spoke of a patient who was advised to take ibuprofen and try naturally and who got pregnant.  I knew then and there that I wanted to go ahead with the treatment, so I booked in for a consultation. 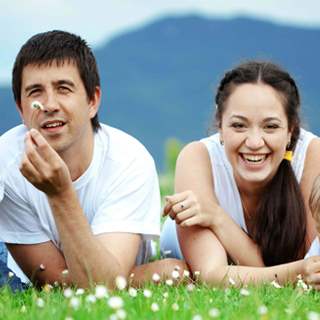 At our meeting with the doctor I was told that although I was only 36 my ovarian reserve was low, and I later discovered that my AMH levels were 0.57 which is classified as ‘very low/undetectable’. I was therefore told that Natural Modified IVF would be the best treatment for me, as it encourages the healthy growth of a few high quality follicles. While I was sitting in the waiting room waiting for my treatment to start I read an article about another patient who had been successful with a similar AMH to my own. This gave me hope and inspired me to continue.

I started my treatment in March 2013 and had 2 eggs collected. Unfortunately neither of them implanted and my pregnancy test was negative. Feeling disheartened, I returned for a follow-up appointment. The doctor suggested that before coming for another round, I should have a polyp removed.

After I had the polyp removed,  I returned to the clinic for another round of treatment. Again 2 eggs were collected and 2 embryos were returned to my womb. Having gone through 2 unsuccessful cycles I wasn’t expecting the treatment to work, and was amazed and delighted to have a positive pregnancy result a few weeks later. Coming in for an early pregnancy scan, I was in for another surprise: I was expecting twins!

My beautiful daughters Jasmine and Ava were born on the 8th January 2014. I am still getting used to the sleepless nights, but can’t imagine life without them. My IVF was totally worthwhile and I can’t recommend CREATE enough”.