All it takes is one egg and one sperm

“Dear Professor Nargund
We firstly wanted to say a huge thank you for doing our embryo transfer procedure last week. We are now back home in Cornwall – keeping relatively rested – and hoping for a positive result in 10 days time, fingers crossed …

We also wanted to pass on how positive our whole Create experience was again this time, all of the staff were incredibly helpful, supportive and professional, and we felt that we were in the best possible hands.”

Our fertility journey started in 2009 when we discovered that my partner had a very low sperm count (some samples found no sperm at all, some found only 1 or 2 sperm).  At this stage my partner was 46 And I was 29. My partner did quite a few samples which we froze in the hope that we would be able to get pregnant using these if no sperm were found on the day of egg collection during IVF.  I had had various tests and none seemed to suggest any cause for concern.  We began our first IVF cycle (a long protocol) in 2010 but I was absolutely devastated when my first scan showed no response.  We waited another couple of days – still no response, so the cycle was cancelled.  I was so shocked and upset as I had thought that there were no problems on my side.  The consultant at our local clinic suggested I have my AMH re-tested and it was less than 2.  It had been 8 when I’d been tested less than a year before and for some reason had dropped suddenly.  The consultant told us that our only real chance was to go for egg donation. 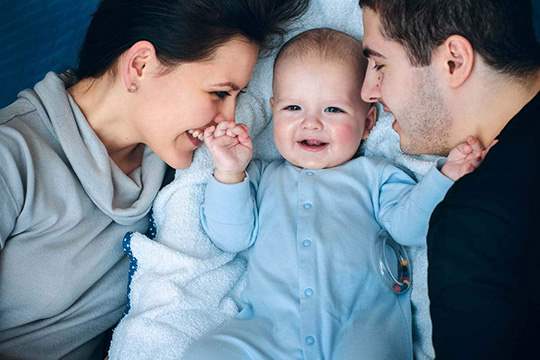 Despite the advice, we tried another cycle using my eggs, this time a short protocol.  Amazingly, I had 8 follicles growing, but only 3 eggs were collected (the rest of the follicles were empty).  All three eggs fertilised, two were put back, but sadly did not result in a positive pregnancy result.

We knew we wanted to try again using my eggs but thought we would try going to a London clinic that saw a lot of women with low AMH, rather than going to our local clinic where the consultant didn’t have confidence in achieving a pregnancy using my eggs.  In June 2011 we did a 3rd cycle with a London clinic that uses high doses of stimulation drugs.  Five eggs were collected although only 2 were mature enough to use.  Both fertilised and were put back, and we achieved a positive pregnancy result.  The rest of that cycle is a very long story, but sadly we miscarried at 11 weeks.

Our 4th IVF cycle began in October 2011 and this time we went to Create, having attended an initial consultation we decided we on the advice of doctors at Create to try ‘natural’ IVF with the aim of focusing on egg quality and reducing the strain on the body of having high doses of stimulation drugs when I was unlikely to produce many eggs.  During this fourth cycle I had two follicles growing, and two eggs were collected, both fertilised but only 1 embryo was strong enough to put back.  I thought the chances of this pregnancy working were so slim – only one embryo, plus my partner hadn’t been able to be with me during the egg collection day due to unchangeable work issues so we’d had to use frozen sperm – knowing that each vial may only have 1 or 2 sperm I thought it was so unlikely it would work.  BUT – two weeks later we had a positive pregnancy result, 7 weeks later there was a heartbeat .. and 9 months later we had a beautiful daughter who is now 11 months old.

I wanted to share our story to give hope to anyone out there who is wondering if it can happen – we were lucky enough to find that it can!  Our situation seemed pretty hopeless at one point – hardly any sperm, hardly any eggs, but it still worked in the end.

I found Create to be fantastic, I loved how small and personal it was, and the ‘natural’ IVF approach clearly worked in our situation.  We are just about to start a new cycle with Create in the hope of having a sibling for our daughter as we are just loving the experience of being parents.  I know how blessed we are, and wish anyone reading this the very best of luck.