Dr Adrija Kumar Datta graduated from the University of Calcutta, India and obtained an MD research degree in Obstetrics and Gynaecology from the same University. He became a Member of the Royal College of Obstetricians and Gynaecologists (MRCOG) in 2005 and subsequently became a Fellow of the College (FRCOG) in 2017.

As a trainee, Dr Datta acquired advanced skills in Reproductive Endocrinology, Subfertility and Assisted Conception from St. Bartholomew’s Hospital, London. He continued practicing as a fertility specialist, alongside mainstream Obstetrics and Gynaecology until the completion of his training in the UK. Dr Datta joined CREATE as a consultant in April 2015 and worked in both sites of CREATE fertility in London, before he moved to its Birmingham Centre.

Dr Datta is a member of the British Fertility Society (BFS), the European Society of Human Reproduction and Embryology (ESHRE), the American Society of Reproductive Medicine (ASRM) and the International Society for Mild Approaches in Assisted Reproduction (ISMAAR). He has an avid interest in academia. Before moving to the UK, he was a lecturer in Manipal College of Medical Sciences in Nepal. His research papers have been published in reputed journals. He has written chapters in books and has presented in many International Conferences. His main area of interest is ‘ovarian stimulation’.

Dr Datta is an instructor for ‘Transvaginal Ultrasound Course’. He was invited to speak on ‘Pelvic Ultrasound’ and ‘Medical Statistics’ and ‘Natural cycle IVF’ by different academic centres in India. In his spare time Dr Datta enjoys being an amateur photographer. He can also speak in Hindi, Urdu, Nepali and Bengali.

Attracted by the idea of ‘Mild approach IVF’ and ‘patient-centred’ Assisted Conception, Dr Datta joined ISMAAR. As an active member of the CREATE group, he practices on this principle and explores it further through research. 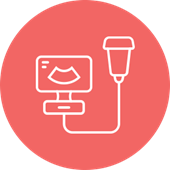 Our clinical team are pioneers of Natural & Mild IVF and are at the forefront of advanced ultrasound scanning.

We work constantly explore ways to improve the technology and procedures to improve outcomes for our patients.

Speak to our experienced team

With one of our fertility experts